A few paragraph-long reviews of recent listens, new and old:

Admittedly, I've only made it through this album in its entirety once. I'd say I've listened to it about 1.4872 times. But I get the gist. It's reminiscent of 60s girl groups, with a smattering of M. Ward's musical stylings. Certainly Ward's contributions are palpable, but for me the album is flattened by Zooey Daschenel's soulless vocals. She's a fine singer, and a fox to boot, but I don't sense any passion in her voice. Just strikes me as drab, tired vocals that give nothing more to the song. She boasts a lovely timbre, just no oomph! Sing, girl!

The album is sure to be big among the late teen, early twenty female population, since 60s girl groups seem to be hip all of a sudden. I, however, will set this one aside and wait patiently for M. Ward's next solo effort.


Bon Iver - For Emma, Forever Ago

This is the type of album that sustains my faith in singer-songwriters, just as Fionn Regan's "The End of History" was last year. Bon Iver is the stage name of Justin Vernon, who in similar fashion to Sam Beam, recorded this relatively short album out of home, something that necessitates a great deal of patience and foresight. The result is a half an hour's worth of lo-fi acoustic tracks, some more sparse than others. But I think Justin is at his best when he focuses on exclusively guitar/vocals tracks, like Flume, Stacks (album opener and closer respectively), and sinlgleSkinny Love. I'll throw Blindsided in that bunch as well, although the addition of a subtle bass drum textures the song nicely (my favorite on the disc, incidentally). He channels Elliott Smith in the way he builds harmonies and double tracks vocals, but his warm, high-pitched register is more Nick Drake than anything.

This is a classic Sunday morning disc. Enjoy a mug of Folgers and put your feet up while you spin this one. But don't neglect a thunderstorm or late night listen when the mood is right... 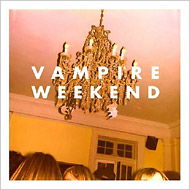 Presumably the whitest kids in America make the whitest album I've heard in a long time. That's not intended to be a pejorative statement...but I defy you to disagree with it. Soul was not a key ingredient the VW recipe. Essentially, the record sounds like rich Ivy-leaguers writing music for fringe-hipsters (allowing for one standard deviation on the hipster spectrum.) I do enjoy the songs, for what they're worth. Kind of like I enjoy skim milk. Mildly satisfying, doesn't really add anything to the situation beyond its manifest purpose. Vampire Weekend doesn't make my cereal any better, but at least I can eat it now. Hooks are not hard to find, with catchy choruses (chori?) like that of "Blake's Got a New Face" and "Oxford Comma". But I can't say I've ever walked away from this album feeling anything more than a sturdy sense of satisfaction. Like, "Cool. Now, where did I put my toenail clippers."

Give 'em a little time to grow. They've got a classic in them.


Marah - Float Away With the Friday Night Gods 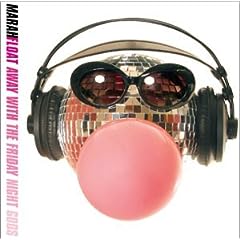 I bought this album a few months ago, and was summarily warned by Marah faithful that this album is an anomaly, a chink in the band's armor. Perhaps, I thought, but sometimes unbiased ears can offer some perspective. Not the case here. I finally got around to listening, and have concluded that this album is a failed attempt at a celebrated live band trying to assert some kind of studio prowess. Generally, I love when a band explores the studio space. That is, it can yield fantastic results. Iron & Wine's last album, The Shepherd's Dog, is a fine example of an act spreading its wings gracefully. Float Away sounds like Marah won a raffle at Guitar Center for a multi-effects processor, and went fucking crazy with it. Every song features some inappropriate and/or overwrought use of phasers or flangers or some other corny-ass effect. Their prog boners raging, they decided some sampling and drum loops were in store, and topped it off with a chick who sounds like Brandy singing lead on one of the songs. And finally, Dave Bielanko threw up his hands and said "Fuck it, I'm singing like Wes Scantlin!"

Despite a few decent tracks like the fine rocker "What 2 Bring", I'd give this one a miss.

Strongly disagree on the SHE&HIM record...

but that's only because I hate soul, and love zooey's voice.