I was listening to some Spoon today and it struck me that their music doesn't change from record to record, yet they always manage to keep it interesting. They're not exactly a niche band, because they don't have a shtick. But there is a distinct and undeniable Spoon sound from which they rarely stray.

I wonder, is this a good thing? It's proved critically satisfying throughout the years when bands successfully carry out stylistic realignments or progressions. Look at the Beatles, Tom Waits, Radiohead, Wilco, and so on. They're all called trailblazers, progressive, brave.

While I've appreciated the progression of each of the aforementioned groups (in these cases I even prefer the late era stuff), there's much to be said for staying comfortably within ones genre, exploring new ground but never uprooting. I like that with some artists, I can't pinpoint an album from their catalog chronologically. Each one sounds a lot like the last one. And if the last one is really good, then it stands to logic that the next one is too. 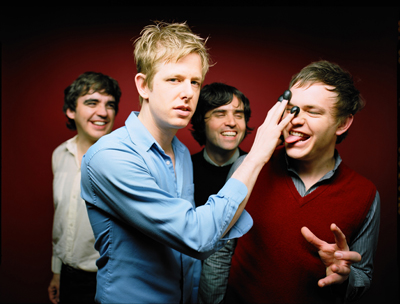 Spoon
I've never scrutinized frequencies of various Spoon songs, but I'd imagine they don't look dissimilar. I'd imagine the peaks would occur at steady intervals. Your classic Spoon song is anchored by a metronome-like drum beat, dotted by a funky keyboard or EP with some chunks of gritty guitar or bass providing the meat. Brit Daniels' torn-at-the-edges vocals are often half-sung with a hustled delivery that ducks between the steady drumwork. They're delightfully hip in a beatnikish sort of way, but flecks of funk and R&B are always evident. M. Ward
I have four M. Ward albums (going on five, new disc out shortly!) and each is a supremely worthy effort. Ward's records are charming as an old credenza in your grandmother's house, and conjur visions of late 40s Americana (no mistake his flagship album is entitled Post-War). Again, this isn't a niche, in that it doesn't seem forced or ungenuine. It's just the brush he paints with. His throat is gravelly and wisened, while his guitars' rich reverb linger like ghost-trails in the lengthy exposure of a black and white photograph. It's a vintagey sound he conveys so naturally that it's hard to believe he's not actually from that simpler time before Moogs and Pro-Tools.

The Avett Brothers
Like Spoon, the Avetts have refined their sound a bit, in the sense that it's a little more accessible and hook-heavy. But, they haven't taken strayed from their bread-and-butter, the sound that validates the fandom of racous fist pumpers and Skoal-chomping grass-pluckers alike. Even as the trio moves into its tenth year of album-making, you'll still hear the raptor-screeches, the banjo assaults, the minimalist ho-downs, the aching sentimentality; it's all there, and by the beard of Seth, it still works.

The Decemberists
Colin and crew come dangerously close to novelty-act purgatory with each album, each accordion-driven chanty laced with monosyllabic words and obscure turns of phrase. But amidst Colin's nasally delivery and penchant for erudite subject matter, it isn't hard to find a compelling melodic attractiveness that makes the Decemberists a respected musical entity. While their LPs have become increasingly conceptual (less a short story collection and more a novel), the band has yet to abandon its tenets of storytelling and accordion fills.

What do you think? Agree, disagree? Suggest your own.
Posted by George at 1:32 PM