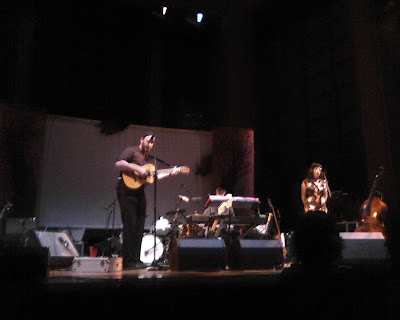 Most of us here at HSW have been occupied by our actual lives, leaving little time for the virtual.
That being said I have been delayed in posting my concert review of Neko Case and Crooked Fingers.

I arrived in Raleigh a couple hours prior to the show to grab a bite to eat and take in the scenery. Sadly, because of my real life woes I ended up snagging some food and napping in my seat until the show started.


Parking at the Meymandi was fre and easily-accessible. Downtown Raleigh was just like any other Southern state capital, a ghost town after 5pm. For the n00b, it didn't help that the venue Meymandi Concert hall is housed in the arts center/progress energy center, so it was not immediately apparent where I was supposed to go.

Nevertheless, the venue was top notch. Impeccable acoustics in a building adorned with fine art of all genres. Waiting for the show to start was a delight as I stared at the brightly-painted abstracts and sculptures; made even better by the realization that instead of general admission, my seat was act 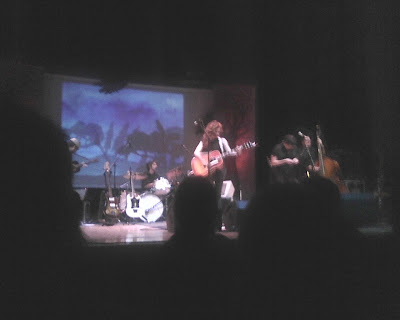 The Fingers' minimalist acoustic approach lends itself well to intimate venues such as Meymandi. This set reminded me of the time Low opened for Wilco at the Cricket Arena's concert hall. The group layered sounds well, incorporating drums, acoustic guitar, bass and vocals along with sparse electronics by way of keyboard and a couple other gizmos. I can't shake the notion, though, that Bachmann's voice is identical to the Boss, or perhaps Bon Jovi during one of his ballads. Upon listening to some of their material, the live versions are stripped of some of their production and IMO have much more impact on the listener than the pleasantries of nuance (strings, guitar layers) that adorn the album versions. I was more impressed with the varyied timing and odd harmonies of each musician and how they did so much with so little. At one point, percussionist/multi-instrumentalist, Tim Husmann slowed down a bit on his shaker which prompted a look back from the band as he caught back up. I pitied the dude, though. He had a lot going on.

After a brief interlude appeared Neko Case and her current lineup. The band was a troop of very talented musicians including co-vocalist Kelly Hogan (who has sang with The Minus 5). (At this time I was not able to uncover the names of some of the other band members.) Neko performed an even variety from all of her solo albums, including a couple of covers. She played several instruments including a couple of four string guitars. One instrument she DID NOT play: a most beautiful Fender Jazzmaster that went untouched throughout the entire evening. *sigh* such a shame.

Kelly and Neko kept some girly-banter going throughout the evening, at times enamoring but others annoying. Neko had the game locked as she serenaded effortlessly through her songs, then strutted off and then right back on for the encore. The band was equally flawless as they fed off each others' improvisations--making the songs come alive without straying too far from the originally-recorded material.

Although I feel like Neko is guilty of having a "formula" to her songwriting, It's easy to enjoy and relate to dark elements that are expressed throughout her lyrics and the arrangements of her music. At the same time, Neko's voice provides a comforting embrace during all that sadness.

Here are a few videos from the concert to enjoy. Please excuse the poor audio, as professional cameras were not allowed. I had to sneak my phone out.

Good stuff man - Glad you got to see Neko in all her glory. I agree with you re: her often similar song structures, but man does she make it work.